Hiring a letterer for your comic, manga, or graphic novel

I wrote a whole series on finding and hiring the right artist to ink and color my comic, so I thought it would make sense to cover how I hired a letterer.

Hiring an artist to do the inks/colors took much more time/effort than hiring a letterer.


What is a letterer?

The artist responsible for drawing the comic book's text (word balloons and sound effects). The letterer's use of typefaces, calligraphy, letter size, and layout all contribute to the impact of the comic (wiki).


Why hire a letterer?

If you talk to any great comic artist/writer, they all emphasize the importance of good lettering. The letterer will improve your comic by optimizing the flow of readers' eyes through the panes via placement of word balloons and sound effects.

In other words, it is more than just slapping the dialogue in a bubble and placing it over text. There is an art to it.

If you still want to do it yourself, make sure you read up on it. I recommend Jason Brubaker's lettering post where he breaks down best practices and also outlines everything he was initially doing wrong.


How did I find my letterer?

I noticed several of my favorite writers/inkers often used the same letterers for all their work. I identified a couple who really shined and reached out to them.

If you are interested it was Marshall Dillon (GLITTERBOMB, HEADHUNTER, WAYWARD, etc.) and Clayton Cowles (Star Wars, Batman, JLA, #WicDiv, Bitch Planet, Redlands, Generation Gone, Iron Man, Daredevil, Black Bolt, etc.). You should check out their great work if you get the chance!

Unfortunately, they were book fully booked, but they did give me a list of letterers who might be available for work (list below in no particular order).

I went through that list and reached out to a couple and finally found one who's work looked good and was available.

How long does it take to letter an issue of roughly 25 pages?

It should take about 3 business days (less if you are in a pinch and the letterer is free/open to do it). Generally, you will notice a couple things you want to change and those additional edits shouldn't take more than 1-2 business days.

Most contracts include two revisions before the final version of the art is sent. (During the review phase, you usually get smaller sized JPEGs but then send over the final TIFF files after payment.)

How much does it cost?

I broke down pay in my Finding an Artist series. Below is the snapshot from writer Alex De Campi's article, "What do comics artists get paid?". 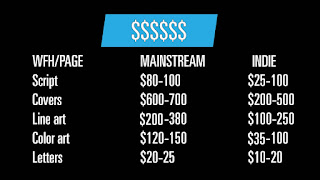 What do I send them?

The nice thing about finding a good letterer is you can now use them for all your projects. Because art takes 1-2 months and lettering can be done in a couple days, you can send them other projects as they come in.

I hope that helps you find a good letterer for your own comic. Thanks for reading!

Popular posts from this blog

Concept Phase: I hired an Artist, now what?

November 22, 2016
Concept Phase Now that you have gone through the process of finding and hiring the right artist, you need to start production on your comic. By the way, if you haven't found an artist yet, check out my last blog series. My Experience I did a concept phase with the artist I hired on my first production before we even looked at issue #1. It took a lot of work, but in retrospect, it was one of the best decisions I made. What do I mean by "Concept Phase"? The concept phase should give you a color drawing of each character and main location that both the author and artist agree upon. If you have written a complete set of scripts (several comic issues worth), it just makes good sense to work with your artist to get the characters and main locations finalized before starting work on the first issue. Why? It saves you a ton of time. Instead of going back-and-forth as the artist is drawing panes of your comic, he/she can focus on making the art great because he/she
Read more

September 05, 2017
TL;DR (summary) Weekly page updates will start on Thursday! Details I had hoped to officially launch halfwing.com in August with scheduled page releases. However, optimizing the site and getting a good backlog of content together took a little longer than expected. That said, I will be starting page updates this week! :) A new page will be posted every Tuesday and Thursday starting this Thursday, so expect to see much more of Cal and Riley every week! :) I have learned a lot about putting together a site on squarespace . I will create a detailed blog on how I did it for any webcomic folks out there. -Jeremy P.S. - If this helped, please support me by reading halfwing , thanks!
Read more

How to pitch your comic book